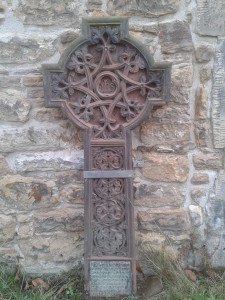 St Mark’s Church, with its surrounding graveyard, is a landmark structure on Portobello High Street. The graveyard contains some architecturally significant monuments. Many of these monuments are attractive designs in a mix of Gothic and Classical styles.

The church is recessed well behind the established building line. It is set within a tree lined burial ground, enclosed by a boundary wall (please see here for the history of our project to restore the wall). The resulting combination of a church placed in line with a gateway and with the churchyard in a formal arrangement is unusual in Scotland and unique in Edinburgh.

The Vestry was granted the right to open a burial ground in 1828 after a long period of litigation instigated by the owner of a neighbouring villa. The burial ground was consecrated on 11th November 1828 and the first recorded interment, on 20th December 1828, was that of Miss Frances Nicholson aged 80, who had donated the first communion vessels to the church.

The headstones provide a valuable insight into the social history of Portobello. In the 19th century, the church membership was drawn mainly from the upper reaches of Portobello society with a large proportion of retired naval and army officers and colonial civil servants. However, the early records of the burial ground show that a fair number of persons from the working classes were interred there. At that time there were three classes of interment, purchased graves, those leased for seven years, and paupers’ graves. The church made a point of insisting that its own mortcloths, batons and caps, bearers and ushers were used at any interment. Mortcloths cost up to one pound two shillings and sixpence (£1.12); grave dues two shillings and sixpence (12 p); turf five shillings (25p); batons and caps four shillings (20p).

There are a high number of military graves, telling us about the history of Portobello with its strong military and colonial connections. This continued into the twentieth century and there is also a Commonwealth War Grave ( Flt Sergeant Hamish Ian Sandison) . Alongside these military graves, there are a number of headstones which tell of the loss of large families, in childbirth and infancy, and those who were unable to afford the burial costs. It is the only historic graveyard in Portobello still in use today.

To read the early registers is to realise that behind each interment there is a bereavement that was just as real for those who lived and died more than 100 years ago as it would be for us today.

When the chancel was added to the church at the end of the nineteenth century, a section of the graveyard was covered by the new building. The church’s burial records are kept in the City of Edinburgh Archives, other than the current Book of Burials. A lair plan is kept in the church with as much information as we have discovered on it. Please contact us if you would like to consult it.

The boundary wall of the graveyard was in serious need of repair and the church raised funds to repair it. The wall is (like the church) Grade B listed, and the gravestones are memorials are placed directly onto the wall in many places. A design team (Simpson and Brown) were appointed in 2013. Through the generosity of the Scottish Episcopal Church Dunderdale Fund and the Pilgrim’s Trust, and from church giving, the church raised £57,000.